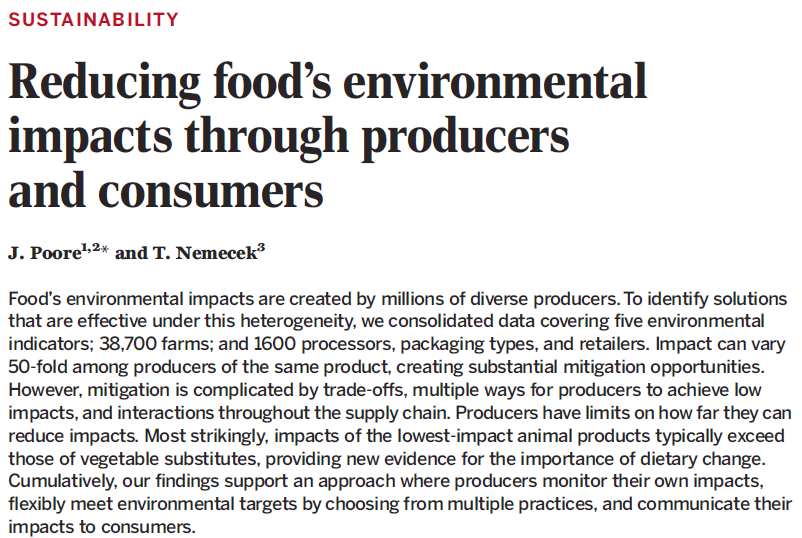 Analysis of environmental data strengthens the case for plant-based diets 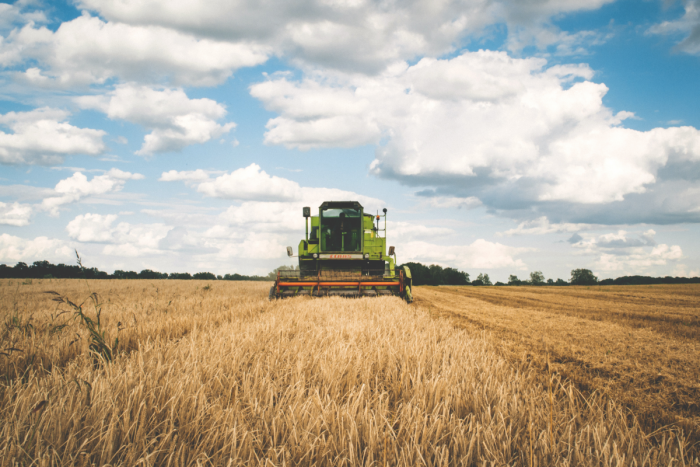 Researchers at Oxford University and the Swiss agricultural research institute, Agroscope, have created the most comprehensive database on the environmental impacts of nearly 40,000 farms and 1,600 processors, packaging types, and retailers. This allows them to assess how different production practices and geographies lead to different environmental impacts for 40 major foods. According to this new study, there are environmental costs in what humanity chooses to eat and drink and shows how these choices make a difference.

Environmental scientist Joseph Poore of the University of Oxford says that the agricultural data shows wide differences in environmental impacts — from greenhouse gas emissions to water used — even between producers of the same product. The amount of climate-warming gases released in the making of a pint of beer, for example, can more than double under high-impact production scenarios. For dairy and beef cattle combined, high-impact providers released about 12 times as many greenhouse gases as low-impact producers. Those disparities mean that there is room for high-impact producers to tread more lightly, Poore says. If consumers could track such differences, he argues, purchasing power could push for change.

Poore and colleague Thomas Nemecek report in their study that protein from beef releases an increased amount of greenhouse gas emissions in comparison to protein from cheese, poultry, and tofu. “Food production creates immense environmental burdens, but these are not a necessary consequence of our needs. They can be significantly reduced by changing how we produce and what we consume” says Poore. Replacing meat and dairy foods from producers with above-average environmental effects with plant-based products could make a notable difference in greenhouse gas emissions.

For producers, the researchers present evidence in favor of using new technology. This technology often works on mobile devices, taking information on inputs, outputs, climate, and soil, to quantify environmental impacts. The technology then provides recommendations on how to reduce these impacts and increase productivity. However, producers have limits on how far they can reduce their impacts. Specifically, the researchers found that the variability in the food system fails to translate into animal products with lower impacts than vegetable equivalents. Diet change, therefore, delivers greater environmental benefits than purchasing sustainable meat or dairy. Further, without major changes in technology that disproportionately target animal products, the researchers show that animal product-free diets are likely to deliver greater environmental benefits than changing production practices both today and in the future.

Producing food overall accounts for 26 percent of global climate-warming emissions, and takes up about 43 percent of the land that’s not desert or covered in ice, the researchers found. Out of the total carbon footprint from food, 57 percent comes from field agriculture, livestock and farmed fish. Clearing land for agriculture accounts for 24 percent and transporting food accounts for another 6 percent. “We need to find ways to slightly change the conditions so it’s better for producers and consumers to act in favor of the environment,” says Poore. “Environmental labels and financial incentives would support more sustainable consumption, while creating a positive loop: Farmers would need to monitor their impacts, encouraging better decision making; and communicate their impacts to suppliers, encouraging better sourcing.”