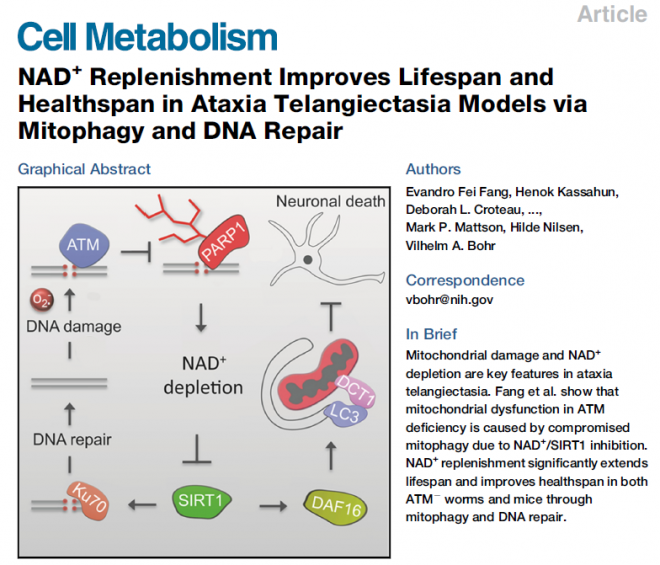 Improving Lifespan and Healthspan in a Disorder Causing Early Aging

A team of researchers lead by Drs. Evandro Fang and Vilhelm Bohr of the National Institute of Aging–National Institutes of Health have identified a possible intervention for use in the treatment of ataxia telangiectasia (A-T). A-T is a genetic neurodegenerative disorder caused by a mutation in the ATM gene, which is key in repairing damage to DNA. Patients experience difficulty with movement and coordination, a weakened immune system, and, ultimately, premature death. Typically, the first symptoms are seen in pre-school-age children, but unfortunately, A-T is not properly diagnosed until some years later because children do not develop at the same rate or in the same manner. The average age of death for A-T patients is 25.

The molecular basis of the cerebellar atrophy and neurodegeneration seen in A-T patients is not fully understood. Mitochondrial damage and NAD+ depletion are key features of the disorder. Therefore, Fang et al. investigated three different methods to boost NAD+: the use of an SIRT1 activator, a PARP inhibitor, and NAD+ precursors. By replenishing NAD+, lifespan was extended and healthspan improved in the ATM-deficient animal models; the severity of A-T was diminished, neuromuscular function was normalized, and memory loss was delayed.

While it remains to be seen whether NAD+ supplementation will translate to the clinical treatment of A-T patients, the findings in this particular study suggest innovative therapeutic approaches to battle this disease and possibly other aging disorders that are due to deficiencies in DNA repair. In addition to suggesting therapeutic interventions, the work in this study also links two aging theories, DNA damage accumulation and mitochondrial dysfunction, that explain A-T symptoms.